Our new normal of outing has been socializing outside in a unique setting with the fresh breeze blowing in our face to keep the germs away. We invite you to bring you drink of choice, traditionally Irish whiskey or Guinness to celebrate the global celebration of Saint Patrick. The Irish culture has ingrained honoring his death by dancing, drinking and feasting. Your crew will be dressed in Jada green and will be happy to supply you with a cold beverage, a delicious hors d’ourvres and a memorable sailing experience!   Dress warm, dress green. Spring ahead and get ready to explore San Diego Bay and Downtown by cruising aboard the historic wooden vessel JADA. We hope you plan to spend your lucky holiday with us!

Downtown San Diego glows with light. But not quite like it does during the holidays. Boats near and far are decorated, sparkling, dressed in pine and the scent of hot cocoa drifts in the wind. During this time of year you can catch yourself feeling a glimpse of warm temperatures during the day and needing a layer or two as the night approaches. In previous years (before COVID-19) the boating community was brought together for a holiday tradition known as the Parade of Lights. For 48 years the tradition has been to dazzle your boat in the finest of festive decorations. Locals and travelers would hug the coast line in the thousands to watch this iconic event. Some would say “It’s beginning to feel a lot like Christmas”. This year looks a little different with the parades cancelled, yet we still find ourselves encouraged to shine our lights! Masts of sailboats are adorned with color, blow up Santa Claus’s and snowman’s are tied down safely to the decks. These neighborhoods of mariners surpass any land lover’s dream. Sailing this time of year couldn’t offer more holiday cheer. Warm afternoons invite us outside and sunset tours allow you to experience the lights of Christmas as the magical hour passes. Wishing you all happy and healthy holidays. We welcome you aboard JADA to enjoy fun and festivity!

With Covid-19 preventing many social gatherings this year, it’s a perfect time to take advantage of this holiday by renting out your own private sailboat named Jada. We take safe & healthy precautions to aid your family & friends needs onboard. Throw your own costume party with a sunset cruise as the full moon rises & downtown lights up in the distance. Or spend the afternoon with us before the fright of night approaches.   Bring up to (30) guest, dress to impress or scare! BYOB & we will make sure your drinks are filled at all times. We will have a Halloween spook-tacular playlist for you on hand. Jada’s crew is excited to celebrate this fang-tastic day with you on San Diego Bay. We are ready to show you our ghostly greetings and pirate capabilities.   Honor the Day of the Dead, All Saints Day, All Souls Days & All Hallows’ Eve by joining us for a festive gathering, donning costumes and eating treats! 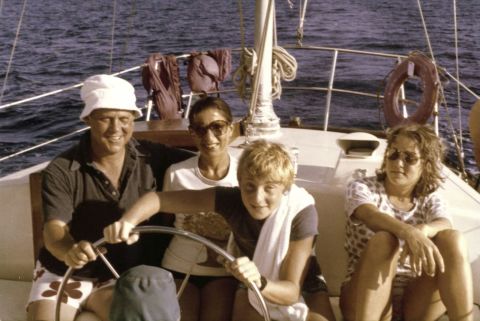 Dedication to the beloved Supreme Court gender equality icon Ruth Badger Ginsberg (1933-2020) With the recent passing of our Notorious RBG, the crew from Sail Jada would like to share our love, gratitude and appreciation for the endless dedication Justice Ginsburg gave fighting towards women’s rights. In the 1970s, Justice Ginsburg set forth to erase the functional difference between men and women in society. She wanted to make it clear that there should be no such thing as women’s work and men’s work. What we can take away from her journey today is to continue protecting women’s rights and gender equality. Thank you RBG for igniting the freedom for women to pursue their passions and their dreams of becoming sailors, pilots, military cadets, police officers, truck drivers, union workers, mechanics, engineers, and attorneys  to highlight a few salient categories. Together we stand for equality. Fair winds RBG! Let’s remember her famous words “Fight for the things you care about. But do it in a way that will lead others to join you”

Sun-shining days in the port of San Diego;   We set sail to celebrate two families coming together.  Loved ones from near and far brought their own excitement for two newly weds as  “This has been a long time coming”.  The wind was in our favor, champagne toasts were being shared and lively music had everyone practicing their sea legs.  There were delicious sandwiches from the local harbor deli & multiple flavors of drinks to wash them down with.   It was a beautiful experience to see everyone so happy & blessed to be spending the day on the water of San Diego Bay.

Make it a romantic evening to remember aboard the beautiful Jada, a 65-foot wooden sailing vessel complete with classic lines and a teak interior, as you and your sweetheart cruise through San Diego Bay and enjoy champagne, beer or wine, along with hors d’ouevres and pastries. This 2.5-hour excursion is helmed by an experienced and friendly captain and crew, who’ll give you a smooth ride and show you the gorgeous San Diego skyline, sea life and more. They’ll also provide a professional photographer, so you can relax and still get all the best shots from your sure-to-be-special sunset on the water.

Today isn’t the first time I’ve been on a sailboat, but it’s the first time to be on one with such a colorful history. JADA, docked at the Sheraton Marina on Harbor Island, is a 65-foot survivor. The only authentic classic wooden sailing yacht for charter in San Diego, She was built in 1938 as a graduation gift for a not-so-wayward son. $28,000 at that time translates to over $3 million to recreate her today. Greats like John Wayne, Bogart and Bacall (while they were having an affair and barred from the yacht club) walked her decks. She’s no sissy either. Built to race to Hawaii and beyond to Tahiti, she’s not tethered to the Pacific shores of California. She’s even weathered a major hurricane. A sailboat cutting through calm water in the harbor is a weightless experience. Silent. To be on the water, spirited only by the wind is extraordinary. If only the marine layer hadn’t staggered around the horizon and clung to land like a drunk without a jacket, I wouldn’t have needed mine. It dropped the temps to chilly. I sought sunny spots on the deck to stay warm and watch for whales. The crew served snacks, offered sea-sick meds to those in need, sunscreen, beer, water, sodas and white wine. I stayed with water, no need teasing the digestive tempest that a wake-crashing sail boat could awaken. The enthusiastic crew took turns telling the history of Naval operations on Coronado, Top Gun take offs, the whales and dolphins which the military trained near Point Loma. I had wondered why they trained these ocean mammals and would never, ever have guessed they made guards out of these warm-blooded vertebrates. They train them to scour the harbor and detect deep water divers or mobilized intruders that threaten the military installation. I’d never considered an underwater attack approach threat, but divers, submarines and smaller depth craft could be as destructive as the bombers that leveled Pearl Harbor with today’s technology. Once we were on the high seas beyond the bay, our whale watch began in earnest. A marine biologist was aboard as part of the crew and made their migration into an engaging story. Because of her, I saw the white spots on the whale’s back not as psoriasis, but scars left from the barnacles that lived until they died there, to become crumbs along the migration trail’s ocean floor.   It is stirring to hear a whale breathe, see the spray, feel its exhale, watch its fluke wave as it dives deep. Unleashed power on a south bound migration. We passed by several whales and I was proud the crew didn’t turn the boat and chase them.  JADA is a class act. Carole, the owner, visited with us, told stories and topped off a fascinating day aboard a legend of the seas. A day of adventure, interesting people, places and things can be experienced on your own.  Don’t stay at home unless you truly want to.  I didn’t board or disembark JADA with a date, but it was a wonderful experience I enjoyed as JADA herself became my date. Even if dementia melts it away one day, I will have savored the encounter.

Oh my, oh my, oh my gooooodness!  We are so excited we are beside ourselves!  The biggest event of the year in San Diego is on the horizon. Just pick up your spyglass and point it to the west and you will see the masts of a fleet of tall ships rising in the distance, soon to arrive at the Big Bay!  YES, the Festival of Sail is coming this Labor Day Weekend. Check out the website here Maritime Museum to see the best place to be Labor Day weekend in San Diego. The Parade of Tall Ships happens on Thursday August 31 from 11 til 3pm.  There are locations all around the bay to view the Parade of Tall Ships from the shore, but we all know that the very best seats are on board JADA, as she takes her place in the parade. So join us for the parade of a lifetime as we open the big event. Call now as we always sell out for this event. Snacks and drinks are provided, just come prepared to have a grand time. Bring your friends and family for the very best view in the world of our own San Diego Tall ships, our famous visiting ships and the highly anticipated San Salvador. Oh, and plan to stop by and say hello to JADA, her crew and our exceptional family of friends and JADA Alumnae. We will be open daily for tours and will sail each day on the bay for the cannon battles and the twilight sails. Visit Don Telford’s Photography site for more images of this year’s Tall Ship Festival. Come see all the tall sail boats of old!

We’re about to enter our second full season of whale watching adventures in San Diego. Last year we were able to spot and sail with whales on nearly every charter. There was one outing where we didn’t spot whales, but we did cruise along with a small pod of dolphins. We see a variety of sea life on every charter. The most common are birds and sea lions. We make it a point on most outings to cruise by the bait barges where there are usually dozens of  sea lions lounging in the sun. We will be doing whale watching tours every Saturday beginning in January and running through March. Please see our calendar here for all of the dates and times. You can click on the date / time of any outing and get more details about the tour. We hope that you and your friends can join us soon for one of these exciting adventures!