Last Saturday gave us a break in the previously rainy weather, and was mostly clear and not too chilly. The seas were a bit rough, but everyone stayed dry as we headed out looking for gray whales just off Point Loma. We were not disappointed, as less than an hour into the voyage we spotted three whales only a few miles offshore. We stayed with them for quite awhile and got lots of great pictures. Here you can see much of the back of one of these amazing mammals as he / she (I can’t tell!) blows air and some water vapor, getting ready to take another breath and dive again. This is a very nice picture with the San Diego skyline visible behind the whale. Shortly into the viewing of the first three whales, two more joined the group and traveled in the same direction. Here are a few more pictures from this outing: This whale is preparing to dive a bit deeper into the water. How do we know this? Well, prior to a deeper dive the whales arch their back more and often show their tail as they angle more steeply down. Here’s another whale thoughtfully positioning herself so as to frame downtown in the background. The wind was not real cooperative during the whale watching portion of the tour, but we were able to spend some quiet time sailing on the way back in. see our calendar 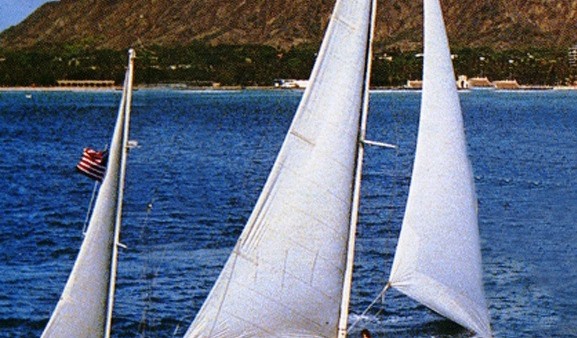 As a yacht charter company we often get asked for a bullet point list of what we do. Any special occasion, is even better aboard Jada. Corporate groups enjoy sales rewards, executive outings, team building and more. Families often celebrate birthdays, anniversaries, weddings and other events. Following is an overview of our charter experience and some of the highlights about charters: Comfortably accommodates up to 25 people (seated) Team building events are available Charters include nice snacks of veggie platters & cheese and crackers A variety of catered meal upgrades are available Drinks include Hansens soda, beer and wine The average charter is 3 hours San Diego Bay or Ocean sailing available, depending on conditions